It happened out of nowhere, really.

I thought I could get up — I’ve tripped over a curb before. I have a tendency not to look at where I’m going, especially when I’m distracted. I was excited. I was nostalgic, visiting your college town for the first time in months can lead to a metaphorical movie reel in your head of fond memories. I saw a store across the street that wasn’t in business back when I lived in Newport, Rhode Island.

But I couldn’t get up, and I let out a yell.

Oh, I tried. I placed my hands on the ground and tried to push myself up, and at the time, I was over 250lbs, so no easy feat there. I tried to get on my knees and tried to crawl my way up to standing. I felt no pain. I felt no discomfort. I just couldn’t get up.

A few good Samaritans heard me yell and watched, as I grew increasingly frustrated, trying to get up. They came to my aid and tried to help me up, but once again, I couldn’t find my footing. I had no idea what I was dealing with, it all happened so fast. Before I knew it, the good Samaritans were calling 911. I tried to stop them. I’d just tripped. Everything would be fine. Except… I couldn’t get up. And my left ankle was now double in size.

An x-ray taken in the emergency room revealed that I’d broken my left tibia and fibula. And it was no small break, either — I’d need major surgery to fix it. The hospital where I was taken didn’t have the resources to treat me, so I was transported to a bigger hospital about 40 minutes away.

I don’t remember at which point I called my parents, but they were in the car within an hour and made it to Providence from New York in three. My friends picked up my car and waited with me as I lay on a gurney in a holding area. After a procedure meant to stabilize my leg, a series of pain-reduction medication and a CAT scan, I was finally in a room by 2 a.m. And even then, it still didn’t feel real.

I’d never been hospitalized before. Aside from my obvious weight problem, I’d always been healthy. Yet there I was, in the hospital, and I wasn’t even sick. But I was broken, both literally and figuratively. And although Rhode Island was once my home, it wasn’t anymore, and I wanted to go home.

And I went home — almost. After five days passed and the doctors still couldn’t operate with my ankle still double in size, my parents found one of the best orthopedic surgeons on Long Island and I was loaded onto yet another ambulance. This time, the long ride would end in my admission to the very hospital I was born in. My stay lasted around two weeks and was made up of two operations, lots of medication and bad food. I left the hospital with two metal plates and 16 screws in my left leg. They said that one day I’d be back to normal, but for now, I was off my feet for the foreseeable future.

For the next two and a half months I couldn’t dress myself. I couldn’t go to the bathroom without a spotter. I couldn’t even get up to retrieve the remote as I sat there, memorizing the daytime TV schedule. This type of life wasn’t like my usual character — I’d just been offered a new job, I was supposed to appear in an annual summer production and I was spearheading publicity efforts for community groups. And all of it was on hold.

But my first lesson I learned through this ordeal came with the realization that on hold didn’t mean forever. My new boss called and let me know she’d hold the job until I was more mobile. I ended up participating in the musical — in my wheelchair! And I worked on publicity campaigns and other projects from my La-Z-Boy chair.

The second lesson? I couldn’t do any of it without help, and by nature, I am awful at asking for it. My mom washed me, picked out my clothes, spotted me to make sure I didn’t trip when I needed to use the bathroom at three a.m., pushed my wheelchair, delivered my meal trays and drove me anywhere I had to go. My dad taught me how to go up and down stairs without using my legs, loaded and unloaded my wheelchair in and out of the car and ran out to get my favorite cookies right before the supermarket closed. My friends and family, driving from as far as Connecticut and Rhode Island and as near as the next town over, visited me both in the hospital and at home and offered moral support. They came bearing gifts of adult coloring books and my favorite Starbucks drink. They drove me around to make sure that I missed as few social happenings as possible and became pretty expert at pushing my wheelchair.

I have always been the helper, the person my friends could call in the middle of the night when everything went wrong — but now I was the one who needed it — and I realized how many people in my life truly cared about me. 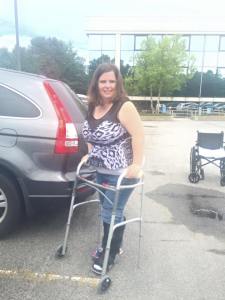 I drove again before I was given the okay to walk, my right foot had nothing wrong with it and I don’t drive a car with a manual transmission. I started my new job, still in the wheelchair — and my new co-workers didn’t know me for a half a second yet they were already helping me in and out of my car. Walking came about three weeks later and while I was excited, I could tell it wasn’t going to be an easy feat. I needed my walker and a boot brace to walk. I needed intense physical therapy. And I was scared.

So, it was lesson time again; I had to learn to overcome my fear of walking. I was so excited to make this step toward independence — but my internal monologue wouldn’t shut up. What if I fell again? What if there wasn’t an elevator where I would be going? What if my friends and family grew tired of helping me? What if I would experience pain every day? What if I ended up using mobility aides for the rest of my life?

With each accomplishment I learned to celebrate. I used the stairs at home first. I graduated from a walker to a cane at my grandmother’s birthday celebration and ditched it a few short weeks later. I diligently attended my bi-weekly physical therapy sessions and relished every “Good job, Mary Grace.” I sang in a concert with my friends taking turns holding my hand as I stepped on and off the stage. I still remember the last day I wore the boot—and made a conscious decision not to need it anymore.

Throughout the entire ordeal I was more tuned in to just how many people struggle with mobility. I watched others limp across a parking lot or get pushed in a wheelchair by a very devoted family member. I promised myself that I’d never turn a blind eye to anyone who needed help walking—or couldn’t walk at all—again. For me it was temporary. For some it’s forever.

Which brings me to the most important thing that I’ve learned over the past year since I fell.

Your life can change in seconds. One wrong step and I’d lost more than the ability to walk—I’d lost my big plans for the time being, my dignity, my independence, all things I’d taken for granted for so long. As I gained each back, I learned to revel in each activity that I went “back” to — and took on some new ones. I was ready to live again. I went after several new opportunities and even lost some weight. I graduated from physical therapy. I rarely limp anymore and I stop myself from freaking out when there isn’t an elevator in sight. I remembered to thank the people I love for all they did to take care of and support me. I worked hard to walk again, but I worked harder to change the way I looked at the world.