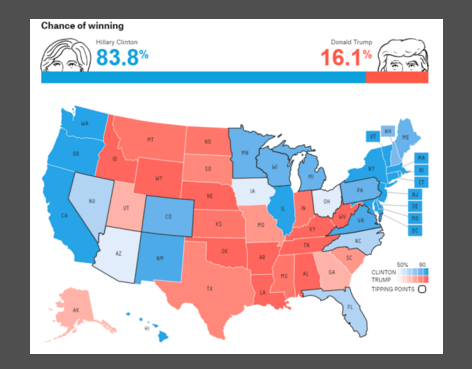 While Hillary Clinton crisscrosses the country campaigning and Donald Trump does the same while stopping off to christen a new hotel, it seems the Presidential race is over.

As of Thursday afternoon, FiveThirtyEight gave Hillary an 83.8% chance to win the election.

FiveThirtyEight’s prediction model is based on the historical accuracy of election polls since 1972. They value state polls over national polls, and the model is “trained to be conservative in reacting to” statistical noise or short-term bounces.

In order to make their predictions, FiveThirtyEight collects, weights and averages the polls before adjusting them. They then combine the polls with demographic and economic data. Finally, they account for uncertainty before simulating the election thousands of times.

Translation: FiveThirtyEight is the go-to when it comes to predicting this race, and they have Hillary as close to a lock.

Now for some context… 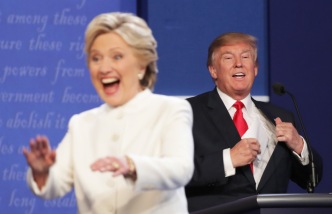 On July 30, FiveThirtyEight’s forecast gave Trump a 50.1% chance to win the election. And as late as September 26, Trump still had a 45.2% chance of winning. By October 8, when the video of Trump’s lewd comments came out, Hillary already had an 81.6% chance of winning. So a blowout just turned into a bigger blowout, which was helped by Hillary’s victories in all three debates as Trump melted down.

Currently running alongside FiveThirtyEight’s overall general election prediction is a state-by-state breakdown of the potential outcome for each state.

Hillary is demolishing Trump on the West Coast and East Coast, where she’s expected to win every state but two in relatively comfortable fashion. The only East Coast States Trump is favored in are Georgia and South Carolina.

This looks like not only a win, but an electoral college blowout in the making for Hillary. In the meantime, Trump has been bellowing for over a week that the election is rigged and that the polls are nonsense and also rigged.

What’s hysterical is that the same polls Trump is discounting now are the ones he lauded when his results with them were positive.

In any event, while it seems that Hillary is well on her way to victory, voters who are fearful of Trump can absolutely not get complacent and stay home.

Early voting indicates a great trend for Hillary, and if that continues through Election Day, she’ll be measuring the White House drapes before midnight on November 8.