Since the Inauguration of President Trump, protests — in response to his racist comments, his derogatory remarks about women and his actions against immigrants (just to cite a few examples of his absurd behavior) — have popped up all over.

Protests of this nature, including the Women’s March, are nothing short of inspiring. They are fine examples of raising voices peacefully for a common cause that will further the greater good. 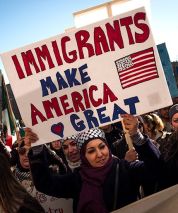 The latest examples of these protests include the “day without” protest, the first calling for all immigrant workers to go on strike for a day in an attempt to show the world just how essential immigrants to the American workforce. The strike took place on February 16, 2017 — and while many employers were supportive, other cases resulted in the firing of a number of immigrant workers who did not show up for work, some even getting fired via text message.

Another protest of the same principle took place just this past week on March 8: a day without women, which was conceptualized by the organizers of the Women’s March. It also happened to coincide with International Women’s Day, which takes place every year on March 8.

The reach of the “Day Without a Woman” extended so far to the point that parents across the country were scrambling for child care as several female teachers refused to report to work at their respective schools. And as I scrolled through my own social media feeds, I was pleased and proud to see that many friends and acquaintances — while they weren’t necessarily (and understandably) able to take off work — wore red in solidarity with the spirit of the day, and wrote heartfelt posts in support, instead of standard bandwagon posts that come around with every popular cause. 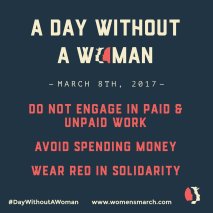 So, why are these protests significant?

We can only hope that these protests send the right message to President Trump: there is no room for racism or exclusion of any particular social group. And as stated previously, they show the lengths that citizens — millennials and non-millennials alike will go to to spread a message and fight for change. We are the generation of change, and we are proud to be part of such efforts.