I had the pleasure of attending The Fest For Beatles Fans on March 4th in Jersey City. And while we’ve discussed it multiple times — back when the Chicago Fest was happening in August 2016, when we talked about bands with the influence of the Beatles, or when we previewed the acts who played last weekend — I didn’t have the full picture.

When I arrived at the Hyatt Regency Jersey City on the second day of the New York Metro Fest — with my parents in tow — I walked into an atmosphere that can only be described as fun and welcoming. We only had a few hours to see everything that I wanted to see at The Fest, but the staff was exceptionally accommodating, not to mention enthusiastic, about why we were there and what we could see. 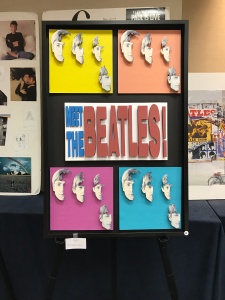 In the midst of a few art galleries and even a room where I added to a massive Beatles-themed collage, people of all ages filled the hallways. While those in my parents’ age group were expected (as they remember when the Beatles played Shea Stadium), I was amazed to see millennials, Gen Xers, teenagers and even little kids sporting Beatles t-shirts, Beatles jackets and even Sgt. Peppers album cover costumes.

The Fest even drew notables — including Klaus Voormann, who designed album cover art for the Beatles and Ken Dashow of New York radio station Q-104.3, just to name a few.

I listened to the Beatles a lot as a child — my dad was fast to play their albums as well as radio stations that specialized in Beatles blocks. At the time, I pretended to hate it — but secretly loved it. I was brought right back to those days while walking around The Fest, and was moved by how the Beatles brought so many generations together.

The highlights of the day, however, had to be the performances I watched both on the main stage and the smaller — but no less notable — Apple Jam Stage. I was most moved by my dad while we watched Birds of Paradox on the main stage as he knew every word to every song played, and I’ll admit — my highly sensitive side got the better of me as they played Imagine.

After we visited the massive Beatles marketplace (and were pleased with our many purchases), it was time to leave — but I’m pretty sure none of us wanted to.

So, what makes The Fest so special? The easy answers are live music, great loot, good people and inspiring exhibits, which are all true answers. But it’s more than all that. The Fest showed me that in the midst of troubling times — both personally, and in our current political landscape — it’s possible to still believe in the values that the Beatles made paramount to their music, including peace for all. Idealism lives on. Music speaks to it. People from all walks of life, of all ages, can still come together for a common celebration.

Millennials, if you have an opportunity to attend The Fest, either in Jersey City or in Chicago, it’s worth your visit. If you’re not familiar with all of the Beatles’ music, I promise you, you’re not “too young” to get it. And regardless of your Beatles fan status, the message is too important to miss. We are the generation of change — be a part of this movement.