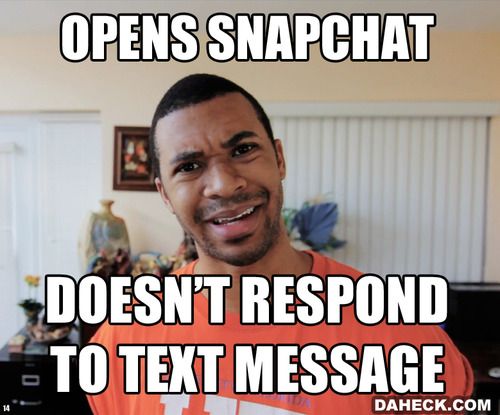 I guess I shouldn’t limit this to just men. I’m sure there’s females out there who do it as well. I just however have not experienced that side of things and can only speak from the perspective of a female who receives Snapchats from men who still have yet to respond to a text message I had sent them hours earlier.

Lately I’ve seen an influx of being sent a Snapchat or a Snapchat message rather than a text message. It’s too difficult to text in the general messaging app but hey let’s open an app we downloaded ourselves and use that to communicate instead. Maybe I’m just old school, but this is not what I want things to turn into.

Does this sound familiar? I’m sure I’m not alone. I’m sure there’s girls (and guys) out there reading this and shaking their heads.

Look, I love Snapchat. It’s great cubicle entertainment. It’s great fun. But it should not become our predominant form of communication. Just because you sent a Snapchat does not mean you can just not respond to a text — or even not send a text.

I just don’t get it. You haven’t responded to my text messages and yet you’re going to Snapchat me a funny selfie out of the blue? No. Please go back to your messages and respond to me first. I want to talk to you. I want to have an actual conversation with you. I can’t be the only one who feels this way, can I?

Yes, millennials have revamped dating, and yes, a lot of that has to do with social media. But does that mean that we forsake ways to actually have a conversation with someone since we can now send pictures of ourselves or type in messages that delete immediately? I mean, to each his or her own, but I really don’t get it.

Relationships — whether romantic or friendship — need conversations. They need a foundation. And Snapchat won’t give you that. It’s all about having a good mix, a great balance, right? So Snapchat away but remember to shoot the person a text as well, or give them a call — or even better, make plans.

Snapchat – and social media – are wonderful in general. But they should not be taking the place of conversations. Chivalry will only be dead if we kill it — an effort should always be made in any sort of relationship.

4 thoughts on “Snapchat: Not an Appropriate Form of Communication”