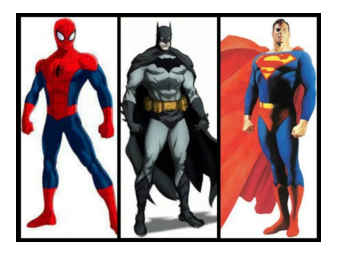 Who doesn’t want to be a superhero? Or at least have the ability to use some of their powers every now and then?

With that in mind, the three best comic book superheroes, who also became small and big screen stars, (we’re sure there won’t be any disagreements here) are…

In a way, Peter Parker has a personality reminiscent of Clark Kent – smart, observant, but reserved. Once he’s bitten and becomes Spiderman, though, all bets are off as he comes out of his shell.

Spiderman’s alter-ego is also the most relatable. He isn’t muscular (at least not compared to most other superheroes out there), doesn’t have incredible good looks, and isn’t popular.

And while Batman has his dark comedic moments and Superman has his charm, it’s Spiderman who seems most like us.

Of all the superheroes, it can be argued that Batman is not only the most complex, but the most selfless. As you’ll see below, all three of the superheroes listed here either have haunted pasts or suffer a traumatic incident shortly after becoming their respective alter-egos.

Batman, though, has the mansion, the money and the power. He’s the only one of the three superheroes listed here who willingly chose to become one.

And once he did, he evolved in a way that’s foreign to those listed above and below.

Why does Superman take the title? Simple.

As Bill eloquently points out toward the end of Kill Bill: Vol. 2, Superman didn’t become Superman. His outfit is the blanket he was wrapped in as a baby, while his alter-ego of Clark Kent is his actual costume.

And it’s Clark Kent, according to Bill, who is “Superman’s critique on the whole human race.”

That means Superman, who wound up on Earth as a baby who was sent from his soon-to-be doomed planet, is here to protect all – not just a specific city.

Even if you ignore the above and focus just on Superman’s ability to fly, his X-ray vision, and his superhuman strength, that’s enough to crown him king of the superheroes.

One thought on “The 3 Best Comic Book Superheroes”