Some days it feels like I was a frantic freshman five minutes ago… and then some young whippersnapper comes along and doesn’t even own a CD player…and I’m reminded how things have changed. My younger cousins grew up with Smart Boards in every classroom and no knowledge of floppy disks, or the beauty of a perfect, freshly burned mix-CD. Things were different ten years ago — simpler in some ways and more complicated in others…

While I cringe at some of the fads my classmates and I obsessed over, I find that some things have withstood the test of time.

Fashion
Fashion in my suburban high school was not very diverse. Most girls I knew wore graphic tees and brand name sweatshirts and flared-leg jeans from a select few stores in the local mall — Aeropostale, Abercrombie & Fitch, or my two personal favorites: Gap and American Eagle. Pair with a pair of knock-off Birkenstock clogs — and that was my everyday school outfit.

Technology (or, 2000s Social Media)
After enduring six hours in the crowded halls, I would race home for the chance to hop on my family’s Dell desktop PC and turn on MTV before my mother came home from work. Before Facebook and Instagram, we tracked our peers’ every move through two mediums — AOL/MSN Instant Messenger and MySpace. The tricky thing was, one could not just connect to WiFi. Back in the old days, an internet connection was established through a cable — that’s right, your phone cable. 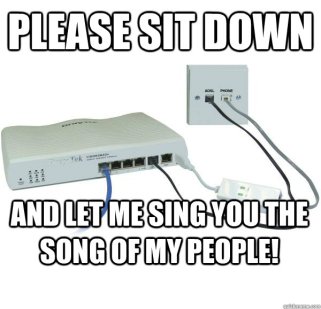 Getting online was not only more of a hassle then, connecting to the internet was also accompanied by an annoying, screeching, static-y noise. If someone wanted to make use of the phone line, your internet connection was lost until the person finished his or her phone conversation.

Once you screamed at your brother or sister to get off the phone so that you could use the computer, you were free to stalk your friends and enemies on AIM, a free instant messaging service that required you to set up a screen name most of us would be too embarrassed to share (my first one was MiracleBaby02917).

In your AIM profile it was essential to write out the initials of your friends or romantic partners, and a favorite song lyric or movie quote. When you stepped away from your computer, you could put up an “away message” that told your friends you would “BRB” and that they could “leave it here or hit the cell”…even though your friends would rather wait for you to “return from away.”

Most importantly though, your away message could be used to passive aggressively alert 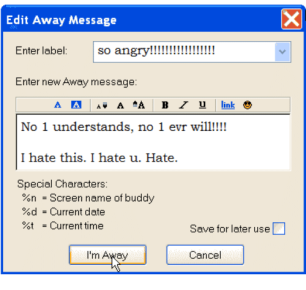 someone that you were angry by posting lyrics like “…thanks for the memories even though they weren’t so great…”.

Since most peoples’ profiles were not set to private, you could keep tabs on their day-to-day drama just by following the changes in their profiles and away messages. Changes in a person’s “Top 8” on MySpace might also indicate that someone was at odds with friends or had called it quits with a boyfriend/ girlfriend for the second time that week.

TV Shows
While searching for the perfect default picture for my MySpace account, I tuned into MTV to watch the best music video countdown show ever created – TRL. Total Request Live was filmed in a studio in Times Square and featured the hottest musical guests of the day, all of who would stand before the enormous glass windows waving to their ecstatic, teenaged public.

Technology, Part 2: Old-School Computers
Homework assignments in the 2000s were completed the old-fashioned way — with paper and pen, or printed on paper and saved on a recordable CD or more often a small square storage disk called a floppy disk.

The After-School Special
After suffering through hours of homework, I liked to relax with some more television –usually programming offered by the WB (before it became the CW), or make mixes of the newest music from my growing iTunes collection to give to my friends (whether they wanted it or not). I would then pack my monogrammed L.L. Bean messenger bag for the morning and prepare to do it all again the next day.

Let’s face it, while we’ve moved on from wide-legged pants and Livestrong bracelets, we continue to be preoccupied with putting our best face out there on the internet and documenting our most mundane everyday chores for the world to see.

We still enjoy sharing the latest music with one another – although these days that task does not involve carting around cases full of disks or risking harm to your computer in order to download it illegally. Instead of “adding” an artist on MySpace to hear said artist’s newest tracks (hello, Boys Like Girls and Colbie Caillat), you can now subscribe to the artist’s page on YouTube.

No matter how cheesy the fads of yesteryear appear to be, without the influence of MySpace or AIM, the features you enjoy on social media or even blogs, like the one you’re reading right now, may not have been possible.